One of the hallmarks of the Christmas story is when the angels appear to the shepherds and proclaim, “Peace on earth,” in Luke 2:14.

Jesus brought about peace, in the most unexpected ways, when he arrived. The Jews, particularly the zealots, wanted a rebellion. They wanted their Savior to overturn the oppressive rule of the Romans and bring about peace in a violent way.

But Jesus had something else in mind. Jesus brings us peace in a number of ways.

First, he gives us inner peace. Because of his work on the cross, we have a chance to receive salvation and be indwelled by the Holy Spirit. This grants us an inner peace (John 14:27). Not only do we have the peace that comes from our assurance of salvation, but we also have the peace of mind knowing God will heal this broken world and will come again.

Second, we have peace with others. We put aside our differences (Galatians 3:28), especially with other believers, because we belong to the same family. We have the same purpose: to let others know about the peace of Christ.

The Hebrew word for peace: Shalom, goes far beyond not fighting with others or peace as we know it. As pointed out in the book Not the Way It’s Supposed to Be, shalom is, in essence, how things are meant to be: a slice of heaven.

The peace of God allows us to look at others through heaven’s eyes and help guide the world to see God’s here and not-yet here kingdom.

Peace from God, biblical peace, allows us to trust in God’s promises (Proverbs 3:5), through restful, tranquil faith, despite the dark, scary world around us.

In that region there were shepherds living in the fields, keeping watch over their flock by night. Then an angel of the Lord stood before them, and the glory of the Lord shone around them, and they were terrified. But the angel said to them, “Do not be afraid; for see– I am bringing you good news of great joy for all the people: to you is born this day in the city of David a Savior, who is the Messiah, the Lord.

When the angels had left them and gone into heaven, the shepherds said to one another, “Let us go now to Bethlehem and see this thing that has taken place, which the Lord has made known to us.” So they went with haste and found Mary and Joseph, and the child lying in the manger.When they saw this, they made known what had been told them about this child; and all who heard it were amazed at what the shepherds told them

Explore Christmas Eve– A study of the scriptures, art and the meaning of the Christmas Scriptures.

Explore the Art of the Nativity from 1200-2002  How the Nativity has been viewed by artists for 800 years. Go to the presentation

A post from teacher and theologian David Lose: “So maybe I shouldn’t describe this Christmas carol as “unlikely” in that Bruce Cockburn has explored the Christian story and theology, along with issues of human rights, throughout his forty-year career. But it may very well be unfamiliar to you. If so, you’re in for a treat, as the Canadian folk and rock guitarist, singer-songwriter’s beautiful retelling of the Christmas story blends elements of both Luke’s tender narrative of the in-breaking good news of God to the least likely of recipients – a teenage girl, her confused fiancee, down-and-out shepherds – with Matthew’s starkly realistic picture of a baby that threatens kings by his mere existence.

Here’s the link to a video with the words .

For more David Lose writing about the Christmas Eve and Christmas readings, check out the “Christmas sermon I need to hear.”

“Space in the Manger”

by Meghan Cotter. Meghan is executive director of Micah Ecumenical Ministries, a faith-based nonprofit that offers holistic care to the community’s street homeless 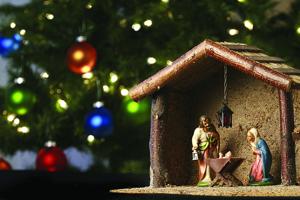 “Some time back, I watched a friend in need attempt to repair five years worth of disintegrating relationships. The library, a local gymnasium, a number of area businesses and even her family had cut off ties in response to her boisterously disruptive behavior.

” She’d picked up criminal charges—a few nuisance violations, a trespassing or two and an assault on an officer. At times, even the agencies trying to help her had been left with little choice than dismissing her from their facilities. But the more the community isolated her, the more volatile became her symptoms. She grew angrier and louder. Her self-appointment as the spokesperson for her homeless peers turned radical, even threatening. Feeling ignored and stripped of personhood, she waltzed into a church one Sunday, intent on being heard. Just in time for the sermon she rose from the congregation, rolled out a sleeping bag and unleashed a number of choice words to convey the plight of Fredericksburg’s homeless.

” The following morning, the church pastor faced a critical decision. In the interest of safety for his congregation, he too considered banning her from his church building. Instead, he made up his mind to find a way to help this woman. By the end of the week, she was hospitalized and taking medications. Within the month she had stepped down to Micah’s respite home, which cares for homeless individuals when they are discharged from the hospital. She realized how sick she really was, and a new person emerged before our eyes. She reunited with family, paid off fines, regained her driver’s license, became remarkably motivated to comply with doctor’s appointments. She set goals—seeking disability, but only temporarily, going back to school, earning a nursing degree and finding a way to productively address the needs of the community’s homeless.

“Christmas on the Edge” – Malcolm Guite

And from this day our world is re-aligned A tiny seed unfolding in the womb Becomes the source from which we all unfold And flower into being. We are healed, The end begins, the tomb becomes a womb, For now in him all things are re-aligned.

Alexander Shaia is the author of Heart and Mind: The Four-Gospel Journey for Radical Transformation. A number of years we read the book together in Christian ed.

In this video he is talking about the shepherds in Luke’s Gospel. The video starts at the 2:42 mark to get to his main message:

You can read portions of the transcribed text here

“The Beauty of the Shepherds story in Luke is that it tells about the journey we make hearing deep in the night of our life an angel announce that there is a birth but that we have make a journey through the night to the dawn where we will see with our own eyes that fresh radiance born before us.”

A Christmas Message from Bishop Goff – “Where is this stupendous stranger?”

Link to the video

“Have a cup of coffee together or a meal together, talk and listen deeply. Look for the face of Christ in that person. Because as we come to really know a stranger in our midst we welcome Christ who was himself a stranger and we find surprising connections that we never imagined with other natives of this world God made.

53 years ago on Christmas Eve we witnessed the moving reading of the first 10 verses of Genesis for the largest audience up to that time. They were told to something appropriate. The astronauts have reflected on the event. A newspaper friend of Borman tried to think of what to say and he could come up with nothing after a night’s work. His wife said (raised in convent in France) suggested, “Why don’t you start in the beginning” He said “Where?”. She said “Genesis in the Bible.” They reflected later – “Why didn’t we think of that.” Borman explained they tried to convey not happen stance but power behind world and behind life gave it meaning. As he later explained, “I had an enormous feeling that there had to be a power greater than any of us-that there was a God, that there was indeed a beginning.”

The full story is here